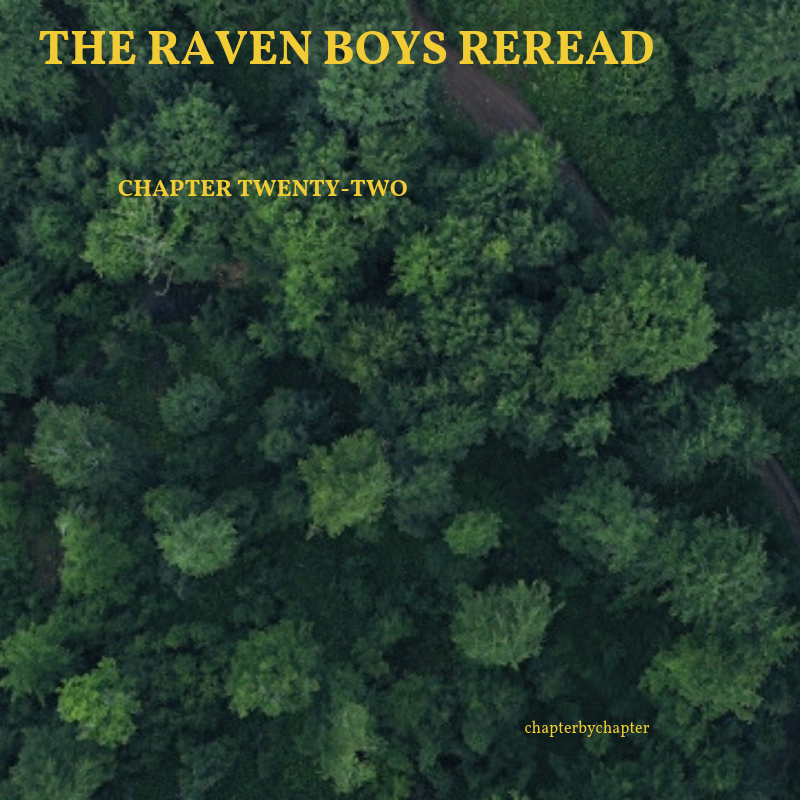 Hello and welcome to the Gansey family helicopter! Okay, so technically it’s just Helen’s helicopter, but if Gansey can charter it on a random afternoon for absolutely no charge, I have to assume Richard Campbell Gansey II has given his daughter a lecture on sharing and the helicopter operates as a family object. So, anyways, to explain what I’m talking about: The Gangsey and Helen are in a helicopter, flying over Henrietta, looking for the Corpse Road.

Gansey feels some rich guilt and thinks ~maybe~ he overdid it with the whole helicopter thing, but we also spend like half a page hearing about how turned on he gets when he’s meeting goals efficiently. It makes him sound like a wealthy and socially unfulfilled banker, which isn’t really that far off the mark. Especially not when Helen calls him out by telling everyone Henrietta is Gansey’s girlfriend, and Gansey is like “:0” and it’s all very funny. Helen is a cruel jokester and we should all admire her. Exactly 35% less than we admire Calla, true, but that’s still plenty of admiration.

We then get into a long and tedious discussion about glassware: Helen got their mother a plate that is not glass for her birthday, and since Mrs. Gansey only likes glassware she will not like this plate. This is only compounded by the fact that Gansey’s only gift is the gift of his presence at the birthday dinner, and Helen is feeling very sulky. You can tell Gansey is very cut up about the whole situation, and is feeling very empathetic and caring towards his mother and sister.

He didn’t like to see either of the women in his family disappointed; it ruined perfectly good meals.

A very good son and brother, as you can see. Just full of love and compassion and pumpkin gnocchi, cooked by the family chef.

The glassware conversation is over so Gansey goes back to worrying about Blue, because he has this obsessive need to be liked that Blue has not yet satisfied. And something about her is definitely fishy. To think about what it could possibly be, our guy pulls a mint leaf out of his pocket and sucks on it. Not an altoid, not a stick of gum, but an actual leaf. We’re now left wondering less about Blue and more about where he’s getting these leaves, how many he has in his pocket at any given time, and if he keeps them in a little plastic baggie to keep his khakis from getting all leafy.

Instead of answering out questions, Gansey calls for Adam over the headset and gets no response. He turns to see what’s up and blesses us with one of the best physical descriptions of a realistic teenage love triangle ever published in the YA genre:

Adam’s headphones were looped around his neck and he was leaned over beside Blue, pointing something out on the ground below. As she’d shifted, Blue’s dress had got hitched up and Gansey could see a long, slender triangle of her thigh. Adam’s hand was braced a few inches away on the seat, knuckles pale with his hatred of flying. There was nothing particularly intimate about the way they sat, but something about the scene made Gansey feel strange, like he’s heard and unpleasant statement and later forgotten everything about the words but the way they had made him feel.

An intimate moment! A tasteful triangle of thigh! Gansey refusing to admit he’s uncomfortable because he thinks Blue is hot in a weird sort of way! TEENAGE ANGST!!!!

We get back on track when Gansey gets Adam’s attention and Blue hands him the map to the church and, by extension, the corpse road. When Gansey sees the church, he asks if that’s it, and Blue makes the mistake of replying with “that’s all there is left.” Sound familiar? Yeah, Gansey thinks so too. It’s basically what he said on St. Mark’s Eve, and hearing that is enough to figure out that it was Blue’s voice on the recorder.

Gansey doesn’t say anything, just lets Blue show Helen where to fly the helicopter, but that’s when Ronan gets involved. Frankly I’m glad Ronan’s in the action again, instead of building ramps or sitting passively in his seat. I missed our overly sharp and aggressive boy.

With his fingers linked loosely together, elbows on his knees, Ronan leaned forward across Adam to be closer to Blue. He could be unbelievably threatening.

To her credit, Blue didn’t back down. Her hears were pink, but she said, “First of all, get out of my face.”

Here’s the thing: I love this shit. Our first real Ronan/Blue interaction and she’s meeting him punch for punch. I love my girl!

Beyond that, the rest of the discussion is fairly cookie-cutter. Gansey is like “yeah how do you know my name” and Blue is like “I’ll tell you if you show me what this thing in your journal means,” to which Gansey goes “that’s fine” and then purposefully acts familiar and easy with the journal in a desperate attempt to get Blue to see past the President Cell Phone mask. It’s a cute idea and I love that he’s trying to show everyone the real him, but then why did he spend five minutes talking about his mother’s extensive and frivolous glassware collection? Riddle me that, my guy.

Blue tells them everything except for the fact that seeing a spirit on St. Mark’s Eve means they’re going to die. I get it. Gansey’s sixteen and adorable and he should have his whole stupid rich life ahead of him. He should have years and years of impromptu helicopter rides and hundreds of times where he accidentally offends Blue with his old money mannerisms. I wouldn’t want to tell him death is imminent either.

Anyways this seems to smooth things over, at least until Gansey tells everyone that they have to be straight with each other from them on, which gives Ronan and Adam the opportunity to grace us with some gay shit:

I love these boys so much more than I am able to express.

After we clear the air, the Gangsey spends some time looking out the window to see if they can spot anything that would betray the location of the ley line. And guess what? They find something! It’s a giant raven, and Gansey begs Helen to land the helicopter so he can touch it, and sketch it, and tell it that he loves it. It’s a big moment for him, and I’m kinda upset he’s not crying but I’ll get over it.

Helen gives them two seconds, because they’re on private property and she has a dinner engagement in two hours. Classic Helen. She sets the helicopter down, and this was one of those times on my first read where I was like, you’ve got to be kidding me! I’m supposed to go to bed and you ended a chapter like this?

They land, and that’s the end. Very rude of you, Stiefvater, especially since this was what got me in trouble for reading after bedtime in middle school.

Having Gansey and Blue POV back to back really is a trip. We know what Blue knows and we know what Gansey knows and we’re just sitting here, trying to figure out how these two sweet and lovely people could have such a misguided impression of each other. Adam is their middleman and he’s doing an impressive job, given the magnitude of his task, so we should take a quick pause to thank him for his efforts. Beyond that, I’m a little disappointed in the role Ronan has to play. Just because he’s not involved in the love triangle (yet) doesn’t mean that he gets to be mean for like one paragraph and then shoved aside, never to be heard from again!

I think it’s just because we’re still figuring out who this group is with Blue in it, which I get, since they literally just met her. It’s interesting, giving the reader over 200 pages in which to get to know Blue, whereas the boys have known her for a maximum of 20. They have 10% of the experience we do, and it shows. There’s a complicatedness to how the three of them interact with Blue: Gansey’s need to be liked, Adam’s shared experience and shaky attempts at romance, and Ronan’s guarded anger. I can’t wait for her to meet Noah, just to get a break from all this tension.

Mostly I’m just feeling pissed about this cliffhanger. Being in a helicopter and hearing about Gansey’s Glendower research is nice and all, but I want magic. I want forests and sleeping kings and, I don’t know, exciting things that remind me this isn’t just a novel about a lonely girl and a couple of prep school boys trying to get along. Not that those kinds of books aren’t good, they’re just not as good as these ones, and the magic is a big part of that. So bring it on, Stiefvater! I’m ready.

He didn’t think it missed her notice how his left hand curved familiarly around the leather binding, how the thumb and forefinger knew just how much pressure to apply to coax the pages to spread where he wanted them to. The journal and Gansey were clearly long-acquainted, and he wanted her to know.

The drawings were mathematical in their perfection, faultless in their symmetry. And the last thing to hit him, right in his gut, was the emotional impact, a mysterious, raw ache that wouldn’t go away. Gansey felt like he couldn’t survive not knowing if the lines meant something.

Action: As the Gangsey zooms through the air, not only does Gansey get in a fight with his sister, but Blue gets in a fight with dangerous snake-boy Ronan. What more could you want? 10/10

Magic: No magic beyond what Gansey describes from research, which is like doing a term paper on rumors of witchcraft in the 1700s: unfulfilling. 4/10

Comic relief: Blue says Neeve is her half-aunt and Ronan asks where the other half of her is. That’s comedy, folks. 8/10