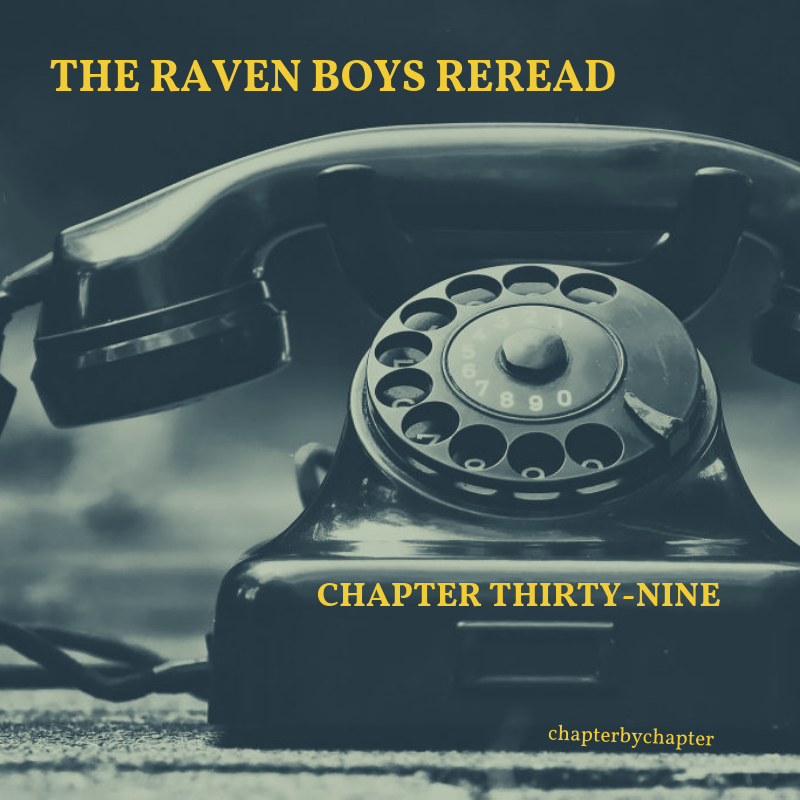 Hello everyone! We are back at it again at Monmouth Manufacturing, with an after-school Blue and an abandoned apartment. After the last couple of chapters I’m thinking it might be nice to just hang out with Blue in an empty parking lot and take a break from all the drama. But Blue manages to make her own drama, by thinking yet again about how little she understands Gansey and how much the fact that she’s actually starting to like him and his apartment (and even Ronan) unnerves her. She also tries to pretend that she doesn’t like the Camaro, but we all know she’s lying to herself. Blue loves the Camaro just like everyone else.

Noah’s waiting in the stairwell to see Blue, and once he uses Blue’s energy he can pet her hair. It’s not as spiky as usual, which Noah says “sadly,” and I just want to take a moment to talk once more about the fact that I’m in college and I’m studying creative writing. My professor would be SCREAMING if he read this sentence. He would take a flamethrower to the book. He would use his writerly connections to call Steifvater and her publisher and her editor and yell at all three of them. Sadly is a bad adjective to use. I cannot picture the emotion. These are things I learn in college!!!! Yay for learning.

But back to the story: Noah fills Blue in on the events of last night. Blue is first surprised that Ronan’s at the library, studying, and then she’s shocked and angry about Adam’s situation, and then she acts so goddamn empathetic and kind that I don’t know what to do about it.

Her first thought was a strangely unpleasant one—that she hadn’t been a good enough friend for Adam to share this with her. But it was fleeting and replaced almost immediately with the horrific realization that Adam had no family. Who would she be without hers?

I feel the exact same way and I didn’t know it until just now (hi family, big shoutout to you guys).

But before I can get too emotional, the phone rings. Noah is absolutely insistent that Blue pick up the call so he helps her break into Monmouth. It’s Malory, asking for Gansey, and Blue has a very dramatic moment where she thinks that her whole life has been taking messages for other people. Cool it, girl. You’re a key player in the hunt for a magical king. You’re in the thick of it, don’t complain.

Malory has some trouble with Blue’s name so she becomes Jane for the rest of the conversation. The gist of it is this: Malory tried the ritual to wake the ley line and when his colleague made a joke about jumping out of his skin, his skin literally came off. Also, Blue shouldn’t tell Gansey because he has a “thing about death,” and it’s so great that there’s now a woman in the hunt for the ley line because it really is such a man’s game, isn’t it? Blue takes all this in stride, copies down the information on some old calculus homework, and hangs up all in under five minutes. A conversation with Malory in under five minutes! Do you guys see why I’m obsessed with Blue now?

Gansey was the first into the room, and he clearly hadn’t expected to find anyone there, because his features hasn’t been arranged at all to disguise his misery. When he saw Blue, he immediately managed to pull a cordial smile from somewhere

Adam and Ronan came in then. Ronan was bent double with a duffle bag and a backpack on his back, and Adam carried a dented Froot Loops box with a Transformer poking out of the top.

“Nice Transformer,” Blue said. “Is that the police car one?”

I appreciate Blue trying to diffuse the situation with aggressive normalcy, but unfortunately it does not work. Adam and Ronan both disappear to their respective rooms to mope, and because Gansey’s bed is just in the middle of the living room, he has to mope in front of Blue.

Gansey continues with his relentless self-loathing, which includes him kicking things and saying “yee-haw” (don’t ask me why, I don’t know). Gansey acknowledges that he’s being self-pitying and Blue agrees and then tells him that she likes him better “this way.” We know she means unmasked and uncertain, the closest they can ever get to what she thinks of as the Real Gansey, but he brushes it off and announces that if there is even the slightest chance someone could get hurt they will not be performing the ritual.

I’m going to take a second to tell you about their physical positions right now, because it’s very important that you can picture this situation. Gansey put his face in his pillow (“sadly”) and so Blue knelt by the bed and kneeled over him. But, when the conversation got serious, Gansey rolled over. Basically, they’re looking at each other upside down and I’m feeling aggressive Spiderman Kiss Energy.

Ronan, taking in Blue’s posture and Gansey’s below, observed, “If you spat, Blue, it would land right in his eye.”

Gansey moved to the opposite side of the bed with surprising swiftness, glancing at Adam and away again as quickly.

There’s yet another argument between Gansey and Adam, of course. Gansey’s stance is that there will be no waking the ley line, because it is too dangerous and he loves his friends more than anything else in the entire world. Even more than this search that he’s dedicated his life to. Adam’s argument is that it’s worth the risk, and even if it weren’t they have to stop Whelk from doing it first. Also, he needs that favor.

We end with Adam asking Gansey how it is he manages to live with himself. It’s about now when I want to close the book and stick it in the freezer.

So. A lot happened in this chapter. A lot to talk about, a lot to process, and yet, like always, this section will be a complete mess that talks about nothing and everything all at once. I’m writing three final papers right now, so you’re going to need to cut me some slack with this organization.

First off, we’re introduced to a version of Gansey in this chapter that I have never met before. And seeing as I am the resident expert on all things Raven Cycle (a title I give myself that nobody can take away from me), you’d think I would have noticed prior to this reading. But I did not!

Malory’s perception of Gansey is inherently youthful, not only because of his own age but because when Gansey was traipsing around the UK he hadn’t met Ronan and he hadn’t met Adam. In other words, all Malory saw was the Gansey façade, because without his friends Gansey is infinitely more isolated and scared. And then, in the page long pity session he participates in with Blue, we see it again.

AND IT IS SO ROMANITIC! I mean, the weird sort of romantic that you have to sit with for a while, but still. Get a load of this:

He muttered something into his bedsheets and waved a hand at the air. Blue crouched by the bed and leaned her arms at the head of it.

“What now? With a lot less pillow in your mouth this time?”

That’s cute. That’s cute. It’s not a Big Moment, but sometimes Small Moments can be even better. You can collect them, and count them, and come back to them when you finish the series and you are sad because you want to hang out with your favorite characters for a little bit longer.

“You are being self-pitying.” But Blue sort of liked it. She’d never seen anything like the real Gansey for so long at one time. It was too bad he had to be miserable to make it happen.

She thought this was a joke. In any case, she laughed and didn’t feel bad about it.

Action: Although there is little to no movement, the emotional action present here is amazing. 10/10

Comic Relief: Ronan is funny but only because everyone else is so sad. 8/10