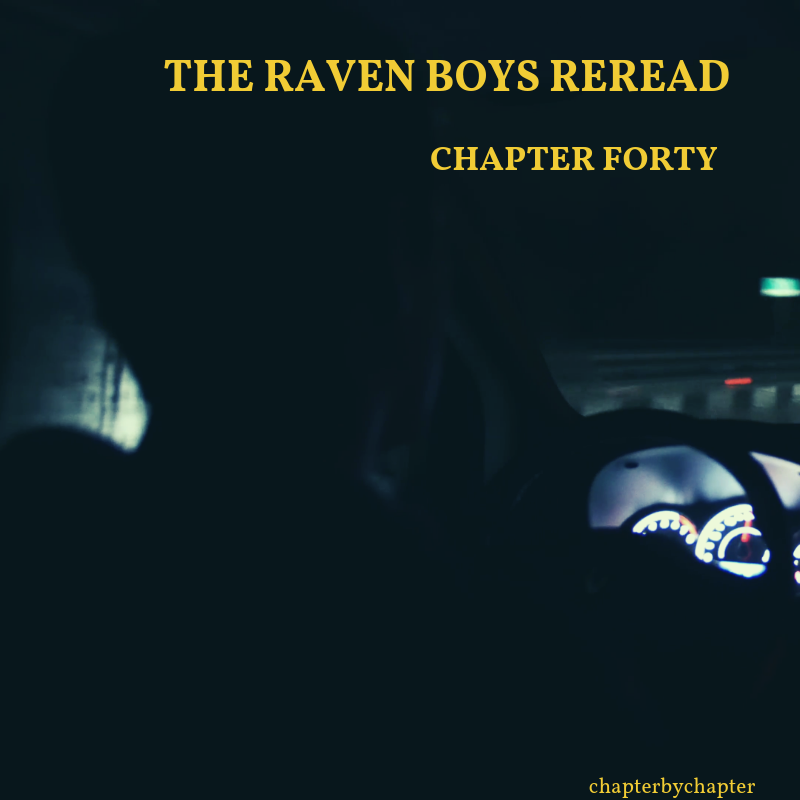 Hello all! An enthusiastic Emily here to tell you that this is THE LAST very short, annoyingly Whelk-centric chapter!!!! WOOHOO!!! We made it, folks. This is the end of the line. This is the moment when we realize that all of the weird chapters where Whelk told teenagers there were cockroaches in their lockers and mourned guacamole have come to their ultimate conclusion. Thank God.

Basically, we skipped right from Neeve giving Whelk a pretend offer to help him to the two of them sitting in the car together. Except Whelk isn’t exactly sitting voluntarily. No, Neeve did the Lord’s work and kidnapped Whelk so she could sacrifice him on the ley line. In the meantime, she’s torturing him, somehow, by eating crackers with hummus.

Whelk knows he’s about get murdered in a ritual sacrifice because there are knives and also Neeve is driving his car wearing rubber gloves. Say what you want about Neeve, but the girl knows how to execute a plan.

She hadn’t told him she intended to kill him, but Whelk had spent the last forty minutes unable to easily see much but the floor behind the passenger’s seat. Lying there was a wide, flat clay bowl containing a collection of candles, scissors, and knives. The knives were sizable and sinister, but not a guarantee of imminent murder. The rubber gloves that Neeve wore now, and the extra set inside the bowl, were.

And even though it means he’s going to die, Whelk gives us a minute to appreciate how poetic the whole situation is. His journey from high school douchebag to best friend murderer to bad Latin teacher to getting killed the same way his aforementioned best friend did. It’s a nice cycle, when you think about it.

But he doesn’t think about it for too long, because as much as Neeve is great at creepy sacrifice rituals, she’s lacking in the knot tying department. Whelk isn’t tied tightly enough, and he knows it. And, scene!

I never thought I’d say this, but GO OFF, NEEVE! It’s kind of amazing what planning to kill a character I hate can do to making me like a person.

I’m also just a little confused about Whelk’s relationship to dips is. He’s pining after this guacamole, so much so that he makes us read three whole pages dedicated to it, and yet what’s making him want to kill Neeve the most is a little garlic hummus? I’d be angrier about the weird nature sounds CD she’s got playing. But hey, I’m neither shitty Latin teacher nor murderer, so I guess I can’t speak to what’s going on in Barrington Whelk’s head.

Honestly I’m just excited that he’s about to be integrated into the action and I don’t have to read these snippets from his perspective anymore. I’m going to reiterate what I said in the first Whelk chapter: I understand why these are here. It’s a narrative arc and it’s important that the villain is established and his motives are clear. It’s just that most people give the villain a big speech at the end that reveals it all in hindsight and doesn’t sprinkle it out over the course of the book in a way that disrupts the narrative flow developed by the main characters.

But, I digress. I got my cute Neeve x Barrington date, in which they’re both planning gratuitous violence, and we’re about to gather our main characters in Cabeswater for a showdown. No more complaining about Barrington Whelk for the rest of forever. Honestly, I think I might even miss talking about the guy. He’s grown on me. Like mold.

Since getting in the car, she had done nothing but eat hummus and crackers, and the combination of garlic odor and cracker chewing was incredibly aggravating. The thoughts that she was filling his driver’s seat with crumbs was one of the more troubling ones he’s had in a week of extremely troubling thoughts.

Action: I mean, the off-screen action was cool. I would’ve liked to see Neeve hit Whelk over the head with something heavy, but I’ll take the hummus-eating aftermath. 7/10

Magic: Somehow I never imagined how the witches transported the sacrifices to the site of the creepy blood ritual. 6/10

Comic Relief: I mean, come on. Whelk was tied up and tossed in the backseat by a Sargent woman with an agenda. I love that for us. 11/10